I realise that the first section of this post could hurt me if any potential employers see it, but i have a rule by which i live and make art and that is; i don’t care.

Recently our store manager has decided that we (the Receiving Dock team) aren’t allowed to wear shirts with designs on them, according to him it seems disorderly. We asked him if this meant he was going to instate a uniform for working on the dock, he told us he wasn’t willing to spend money on uniforms for the seven of us, but reiterated that the shirts we have been wearing for the last six months in my case, and the last two years for some others that have worked there, are no longer acceptable and that we would need to buy new plain shirts for ourselves. Ever the champion of the common people i took it upon myself to point out the obvious, that if he – the manager of the store – wasn’t willing to buy some shirts, we – the minimum wage employees with shirts that have, and continue to, function – would be even less inclined to do so. He remained unchanged in his views. He had to be destroyed.

i’m not sure how most workplaces function but i see our work (or at least our division) as a ragtag bunch of freedom fighters perilously striking out against the iron fist of a tyrannical despot. As such it was my duty as one of the outspoken, ne’er do well artsy types to make our position known; to that end i created a design which i knew would both a) make it clear to our overlord that we were less than content with his policies, and b) have a monkey in it. 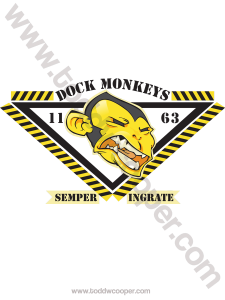 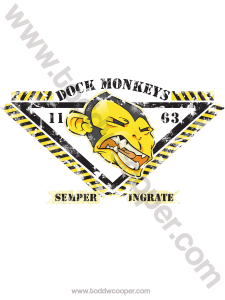 The term “Dock Monkey” came from some graffiti on a flatbed cart we inherited from a store that closed down, we don’t yet refer to ourselves as dock monkeys but i live in hope that one perfect day it will catch on and we shall be known throughout the lands as such.

Once we paired the design up with some t-shirts and we were ready to incite some dissent. And, while i do realise that i have spent more money on this project than i would ever have on simply buying some plain shirts, the principal is what matters here, not the fact that i cannot afford to eat for the next two weeks.

Also, possibly because few animals in the natural world are as instinctively badass as the honey badger. I never knew about honey badgers until i saw the video, but they look kind of like wolverines so they gelled with me instantly. This just came about during a lazy afternoon sketching, i think i was watching The Wolverine with my buddy. 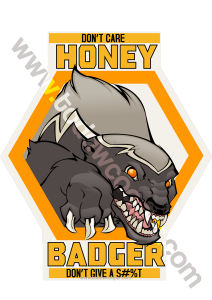 You can buy the honey badger design on a shirt, hoodie or iPad cover here.

Princesses nowadays (and arguably in days gone by) don’t need saving, they’re sweet as sugar and sharp as diamond. They fight their own battles, save themselves and open their own pickle jars – okay that’s my one girl joke in this part of the post, the rest is absolutely serious.

Don’t know why but i’ve been holding this one back for a few weeks, tooling and retooling it so that it didn’t feel too camp, because let’s face it when guys make designs like this they have the potential to seem quite patronising. This was not my intent. I wanted this to be cute, not too cute and also, most importantly sincere.

You can buy a shirt, hoodie or throw pillow with this design on it here and here.