Of Unicorns, Both Living and Undead.

Unicorns, man.
If i posted every picture of a unicorn that i have ever drawn, painted or scratched into the dirt with a stick there would be unicorn images beyond count on this blog. i don’t know why but i have always been into drawing unicorns.
Recently i was asked to draw a unicorn by a friend at work, naturally i jumped at the chance… 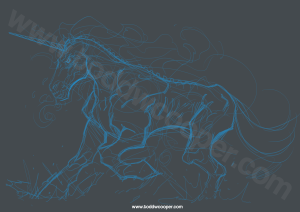 As with any picture of a unicorn this one started with a rough sketch. 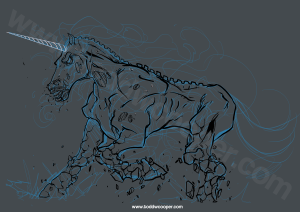 …There was a twist though; she wanted an undead unicorn.

i knew i wanted it to have a mane and tail made of fire, no idea why, it just seemed necessary at the time.

To anyone else this may be weird, however undead unicorns are the third most common type of unicorn i draw… 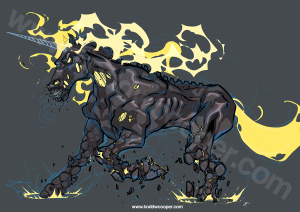 …(the most and second most common being normal unicorns and robot unicorns, obviously). 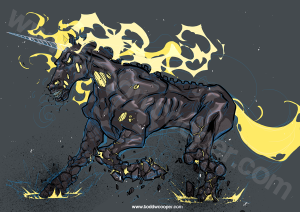 This fiery, beast with torn open skin, crumbing stone for legs and glowing innards may seem like a strange take on an undead unicorn, but let me explain my take on non-undead unicorns;
Unicorns are, at their very core, elemental beasts. They are not typical flesh and blood and bone like humans and the common animals of the forest we hunt, they are beings of ethereal and supernatural nature, strong, smart and almost impossible to catch (any bestiary worth its salt will tell you a unicorn can only be caught by using a semi-naked virgin girl as bait).

As a beast of otherworldly origin a unicorn does not simply rot and decay like a normal horse would, instead the animal’s corporeal form would fester and corrupt becoming a twisted, ruined perversion of its former self.
Where before it was beautiful now it would be terrible.
i imagine unicorns (of the living persuasion) to be almost luminescent, shimmering with a bright white light, so a corrupted unicorn may still create light but it would be a fearsome and destructive type of light – i chose to show this by having jagged plumes of white hot fire sprouting in place of it’s mane and tail.

It goes without saying that red/orange is one of but many shades of fire possible on an exanimate unicorn.