The Beautiful Black Gate Welcomes You!

I was looking forward to this game since it was announced, i’m a massive LotR geek, and seeing a game that plays like Assassin’s Creed, features an Elf wraith hungry for revenge possessing a Ranger of Gondor, and is set in Middle-Earth with loads of hidden lore items to pick up excited me to no end. That’s not even sarcasm.

My enthusiasm only grew as more and more information was leaked out, and so i started sketching little thumbnails of scenes that would be fun to draw up. This was strange for me as usually i stick to single character pictures, but whatever i was going to run with this all the way to the end. 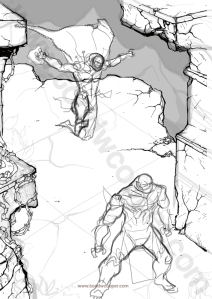 This was my original plan for the picture. After working on the background for a while i felt it was a little underwhelming and not really what i was aiming for, it lacked pop – but more importantly it lacked Celebrimbor the wraith spirit that plays a fairly large part in the game.

Here’s the next draft i came up with; a little more character-centric and featuring Celebrimbor as well. But no, it still wasn’t right. Back to the drawing board.

So, here it is, the final design. Talion, Celebrimbor, ruined bits of fortress architecture, barren mountains, and a decapitated orc (possibly even uruk hai) head. This was the kind of thing i was aiming for. A scene that showed Talion being kick ass, Celebrimbor (jesus tha’s a long name to write multiple times on one post) being all spirit of vengeance, and at least one decapitated orc. 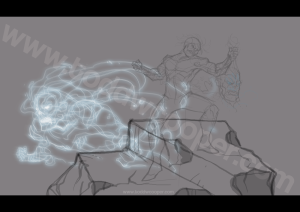 after inking all the set pieces and mountains i decided to scrap most of the things in the middle ground, it just made the picture too busy and took too much attention away from the main characters, plus having a bunch of things in the background when you have a semi-transparent character just gets a cluttered feeling.

it took very few steps to get Celebrimbor to look the way i wanted him to look, lucked out on that one.

Surprisingly Talion was a little harder to get right than his wraith counterpart, not least of all because there are very few clear full pictures of his character model. At one point i was thinking of doing his Dark Ranger costume because the screenshots of that costume were the biggest, clearest reference pictures i could find.

So, here’s the finished product; Ranger, wraith, orc head, glowy bits, and all.

Having still not played the game i can’t say for certain that the picture is a fair enough representation of the feeling of Shadow of Mordor, but hey, i had some fun doing it.