Shameless Self Indulgence, and Even Shameless-er Self Promotion

My last post was over 7 months ago, and i can honestly say i have done very little in the way of personal work in the time betwixt then and now.

Then, like a great, chaffed maw – cracked and blistering from exposure to the elements, the muscles weak from holding back the contents within; at times coalescing and putrid, gaseous in form, then viscous liquid, then suddenly a solid lump, crusted over covered with crystalline outcroppings, but always turbulently swirling within – my brain let slip some of it’s vile contents, and here, now, ever so timidly, i present – some things i have done. 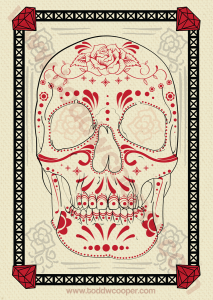 You could be viewing this on your wall, if only you’d go to Redbubble

Who doesn’t love a calavera design? No one, that’s who. I know i would happily sit and draw these things all day if i had time. I like to imagine myself as an old man, retired, sitting at a table furiously scribbling these skulls over any piece of paper my gnarled, ink stained hands could grab, feverishly and in a trance like state i would sketch skull after skull, before the nurses are called and forced to sedate me, again. Oh how i would struggle at first, my fists clenching pages torn from books, napkins, any papers i could find. The orderlies would know from experience to wrestle the pen from my hand – some careless doctor or visitor would be reprimanded later for allowing me to borrow it – i would curse them in a language that i think sounds Spanish, but is clearly made up and call upon great serpent gods to strike down my foes, but the sedatives would have already taken hold at this point, and i would slump down to the floor, breathing short ragged breaths as the staff are forced to drag me back to my room. Before the cold darkness of unconsciousness takes me i would reach up and slip a small sketch of a calavera into a nurse’s pocket for him to find later; scrawled around the design in tight, hurried text is a random collection of symbols and letters that if he decides to research will break his mind and enslave his will. That was how it happened to me…

You could wear this on you if you go to Redbubble

Buy this printed on stuff at Redbubble

Snake oil is absolutely one of my favourite products (or even concepts) ever sold by people. Sure, it’s a horrible, fraudulent way to make money from the suffering, discomfort and naiveté of other human beings, but all in all… it just has that grifter’s charm that makes it just too hard to hate for any amount of time.

i don’t know if i’ve provided a link to my Redbubble store in this post, so i’ll just leave this here… http://www.redbubble.com/people/todd3point0